Oludeniz And Fethiye Via Gocek 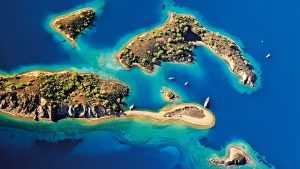 With Dalaman International airport only 20 minutes away, Gocek is a jewel of a town nestled between Fethiye and Dalyan. What puts Gocek on the map is its 6 marinas and the bay area is also a harbor for islands that provide ample anchorage for many gulets. This amazing harbor town is home to Super Yachts and is a great starting point for many a yacht charter in the Mediterranean.

Gocek is a starting point for the local 12 Islands Tour and an island of the same name is closest to the harbour, perhaps 10 minutes sailing? Those not wanting to sail can visit its beach where many will stop during their tour of the islands. There are refreshments available on Gocek Island throughout the sailing season. If you wish, you can camp perfectly safely under the trees ans simply spend a relaxing time.

Kizil island is considered to be a magical place at sunset. The islands name means red and the grounds color is red. However, it is at sunset when the whole island transforms, all the stones turn crimson red, providing you with an amazing photographic shoot. The island is uninhabited, apart from a lighthouse that is located on the southern tip. The Deliktas isles re located to the north west and are considered to be another great place to anchor, but for swimming and fishing. 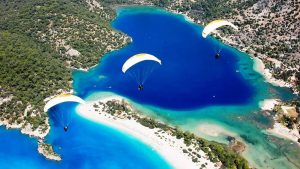 Gemiler island is an uninhabited island near the city of Fethiye. It has a lot of restaurants and cafes located near the famous ruins, but the owners don’t live on the island, they come every day for as a tourist business. Gemiler is considered to be the resting place of St. Nicholas, or what we all now as Santa Claus, who is also the Patron Saint of Sailors. During the early Christian era this was a very active island with a lot trade and commerce. It his home to some Byzantine ruins and St. Nicholas’ tomb. The island is now a pilgrimage site, as well as a favored day stop for yachts. The local cuisine is exceptionally tasty, and they are located in a nice relaxing spot with wonderful views. Blue Cruises have a license to stay overnight, but the rest of the island empties at sunset, and it becomes quite desolate. There is no commercial site to restock, so if you need supplies its best to sail onwards or restock in Fethiye.

Close to Fethiye nestles Butterfly Valley. This valley is only really accessible by sea, since it is surrounded by Rocky Mountains. During the summer, and only for a few weeks, the valley fills with butterflies, hence the name. The largest species found here is actually a moth, it’s the white colored Jersey moth.  The valley has a stream running through it, so even when the place is devoid of flying colors it is still an amazing place to visit. If you want to stay inland overnight, you can do so, but there are strict rules for camping that need to be adhered to.

Ölüdeniz is Turkish for Dead Sea, which it derives from the calm waters that seem to shine like a pane of glass all year round. Ölüdeniz is a small village in the Fethiye district in the Muğla Province. It is one of the most visited and popular tourist spots on the Turquoise Coast of southwestern Turkey. The blue lagoon sits within a pebble beach enclosure, and the waters are crystal clear, aquamarine and differing shade so of blue. Behind the town is Mount Babadağ, that sets the pace for the paragliding community. This is considered to be one of the best and most beautiful paraglide locations in the world. It is also part of the Ultramarathon called the Lycian Way Marathon. For visitors arriving by yacht, this is a great place for snorkeling and scuba diving, since the lagoon has plenty of small underwater caves and a lot of interesting fauna and sea life. Apart from the activities found here, there is a tourist center that has a number of restaurants, cafes and shops to restock if needed. 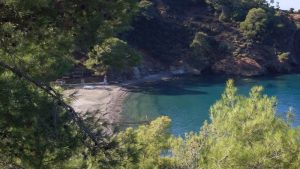 Gulet charter Turkey continues with Turunc Pinari. Turunç Pınarı is on the eastern shore of the Gulf of Fethiye. It is lined by pine trees and is home to a lovely restaurant. The restaurant has a pier with 15 moorings, and it supplies water provisions as well as a few times for restocking. If you take a short walk up the hillside, you will find a natural water spring under a walnut tree. Yachts usually anchor around 25 meters off the shore, and this is a perfect sport for a short landside respite.

Quite close to Fethiye is Samanlik Bay, this small bay is considered to be a great location for anchoring, even when Fethiye is close by. The slopes leading down to the bay are covered with trees and the waters are cool and inviting. This is a regular anchor location for many yachts, and is if you want to visit Fethiye, its just a short sail away.

The sea side city of Fethiye is located half an hour’s drive from Dalaman Airport.  It is a well-known tourist center in the South West of Turkey, and has a lot of bars, restaurants and many different day and night entertainment spots. Fethyie in itself is steeped in history with a number of exciting archeological sites and the area is steeped in layered culture, built over centuries. Th city has three marina’s, all with modern facilities. Fethyie is a great spot for starting or finishing a yacht charter and has quite a few islands dotting its coastline adding spice to an already colorful city with a lot of local cuisine to whet your taste buds. 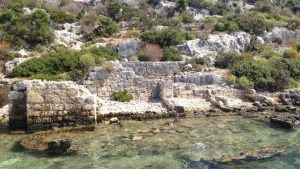 The biggest island in the Gulf of Fethiye is Tersane Island, known also as Shipyard Island. This bay has a 100 meter deep channel that was used by the Ottoman navy, hence the name shipyard island. The bay area has a lot of coves and towards the east lies the Summer harbor those are nice spots for gulet boat holidays. The west side of the bay is not used much due to the strong winds that prevail most of the year. There is an ancient ruined town nearby called Telandria, and if you want to stretch your legs, this is a great place to do so.

Although this island is now called Prince Island, it was originally known as Domuz Island, which means Port Island, named after the abundance of wild pigs that flourished there. Today, Prince Island boasts no pigs, but does have a tranquil splendor.

Just off the Domuz Bay lies Gobun Bay. The entrance to Domuz is extremely narrow, which adds to the excitement and mystery. Once inside the bay you find tombs cut into the rock side and the whole area is covered with olive and pine trees. 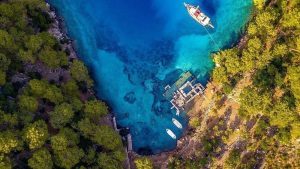 Gulet charter Turkey’s next stop is Yavansu Bay. Yavansu, or Sea Gull bay is a popular tourist spot for both foreign and local visitors. The bay has fig trees and small streams running down from the mountains. However, the fresh water is only for animal use, not human. The name Sea Gull comes from the mosaics found in the bay and is linked to the ancient town of Arymaxa found at the top of the hill. Aymaxa is home to four Roman mausoleums and a Hellenistic tomb, as well as a Byzantine cistern, all proof of this locations long inhabited history.

While sailing along the coast near Hvar, there is a smaller island, it is Šćedro island, and you will be able to anchor in Manastir Bay. The bay is named after the abandoned monastery found just overlooking the bay, it was constantly pillaged by pirates until it was abandoned. And left to ruin.  Šćedro Island is home to a crater lake as well as some lovely trails. The bay area is exceptional and that is why Blue Cruises will always stop here. There are a few restaurants sitting in the bay, with lovely pergolas calling you to enjoy the shade and feel the gentle breeze, as you sip wine and watch the yachts come and go. This is not a place to restock, but it is a great stay over for a night and enjoy a dinner under the stars over calm waters. The bay light sup at night, and is a tranquil spot of serenity.

Yachtsmen love Sarsala Bay since it is a natural bay providing great swimming opportunities as well as a good place for overnight anchoring. The bay includes a pontoon that leads to a restaurant, and the inland scenery is delightful. There is a valley that leads inland through a dense forest of trees. The beach itself is stony, so come prepared. 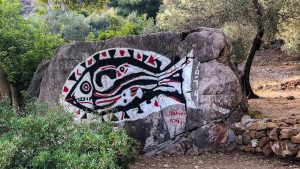 One of the highlights of gulet holidays Turkey is Bedri Rahmi Bay that is named after the famous Turkish author Bedri Rahmi Eyuboglu, he used to come fishing in the bay, which was previously known as Dark Bay since Lycian times. During one of his fishing trips in 1973, he drew a fish on a rock at the entrance of the bay, giving the rock a new title “Fish Rock”, this is now the name for the entire area. This bay is well sheltered, so winds do not prevail, and the colors are distinct, with the clear azure waters contrasting with the green pines, olive trees and oleanders that populate the hillside. The overall effect is exaggerated by a clear cyan sky. Between Boynuz Buku and Tasyaka is the bay of Kille Buku. This is considered to be a great picnic stop for travelers visiting from Gocek, since it is heavily shaded by the trees. 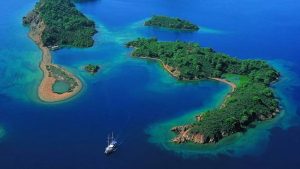 Near Göcek is Boynuzbükü bay. This bay hides 12 uninhabited islands called the Adalar. A lot of luxury gulets come to enjoy the waters and scenery of this area. It is very close to Fethiye, so day travelers are found in abundance. The island itself has a small restaurant offering local cuisine and freshly caught seafood platters. The bay area is covered with fruit trees that provide a fragrant shade.

In the Gulf of Fethiye lie the Yasica islands, these are uninhabited islands that are perfect for swimming, visiting and just sailing around. Most of these islands have secluded beaches that provide a private relaxation environment, and you can while away the hours swimming and enjoying the quiet. Apart from relaxing, you can also enjoy a lot of water sports here, especially child safe water sports that provide a great daytime activity for your kids. The beaches and sea shores are stony, so you should come prepared with proper sea footwear. Some of the islands are so close to each other, that you can swim from one to the other, which provides a lot of exhilaration, as well as competitiveness. The nearest port is located at Gocek, and that is also where most of the day trippers come from. Try to stay for sunset, this is when the cameras come out and some of the most romantic and breathtaking shots can be taken during these hours of the late day.

You arrive at Gocek at the end of your voyage, after taking in all the wonders of the Mediterranean, possibly also the Aegean and Adriatic. When you berth in Gocek, take some time off before you leave to the airport. Enjoy the wonders of this beautiful town and take one last taste of all that Turkey has to offer. Walking the promenade and enjoying the sunset. Maybe that carpet you saw when you arrived is still waiting for you to buy it and place it at home, providing extra warm, memories of an ancient coastline and land filled with warm wonders and experiences.